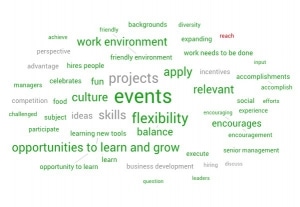 During the month of August, iWorks Corporation hosted a virtual Spirit Week to celebrate iWorks as a company and bond our employees. One of the Spirit Week’s contests for our employees was the tagline contest: develop and propose taglines that best represented iWorks. The tagline should be a catchphrase for iWorks that highlights our mission and connects our clients to our company. With a coveted gift card prize on the line, stakes were high and competition was fierce. Employees were given four days to participate and eight employees threw their creative energies into the contest knowing that only one could emerge victorious. However, their courageous efforts did not go unnoticed as all entries gave a glimpse into how iWorks employees view the company in just a few words while also providing an opportunity to have some fun.

After deep reflection by the executive team, the winning tagline was announced: “iWorks: A Small Business Making Big Impacts.” A Proposal Manager on the Business Development team, Ciara Kalf, is the mind behind the great idea. We were able to catch her for a few questions in between her proposal work. When asked for her reasoning behind her submission, she said, “iWorks is a small company, but it really is incredible how much success and overall impact to national security we can claim.” Well said! Thanks to everyone who participated.